A tough edit but here is my top 20 images shot last year. 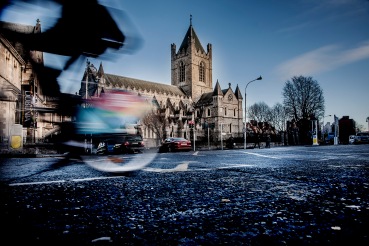 In the year of 2000 I was commissioned by Young and Rubicam, New York to shoot an ad campaign. One of the 5 ads was to photograph the Long Beach lighthouse located in Orient, NY known as ‘Bug Light’ .

Long Beach Bar “Bug” Lighthouse helps mariners navigate around the hazardous sandbar located between Orient Harbour and Gardiner’s Bay, its bright beacon welcoming them to the protected waters of Peconic Bay in the Long Island area.

The original structure was built in 1870 on screw piles which left an opening beneath the structure and inspired its nickname “Bug” Light, because when the rocks were covered at high tide, the lighthouse looked like a giant water bug.

Weather conditions and tides were going to be significant. So under my direction our lighting crew with equipment, assistants Maura Shine and Francis Catania, Tom Hayes and his assistant from ‘Spotty Dog’ productions, Art director Dan Fallon, creative director Robert McDuffy from Y&R, His friend ‘grabo’, an account exec along with agency producer Karen Meenahan and not forgetting the clients, set off on a hired fishing boat to recee and prep the location. It included working out where our final shooting place would be after shooting various polaroids in various view points. Lighting the interior and exterior with 20 and 50K Ari HMI lights which had to be determined with various lighting set ups with emphasis on balancing the light values between the exterior and interior.  Weather and tide conditions were taken into account, returning the following day with our working lighting crew and agency based in the lighthouse whilst myself, Maura, Francis and Tom waded a couple of 100 meters to our chosen position on a sand bank . Our window of opportunity was short so we had to work fast with reports of a storm.  Our fishing boat captain wasn’t going to wait until its too late! Once we were set up and ready to shoot I was then able to direct the lighting positioning, light intensity and colour by communicating via walkie talkies. The tide was surging and rising , so paying particular attention to protecting the sheet film and camera equipment from the sea water we made a mad dash back to the boat. 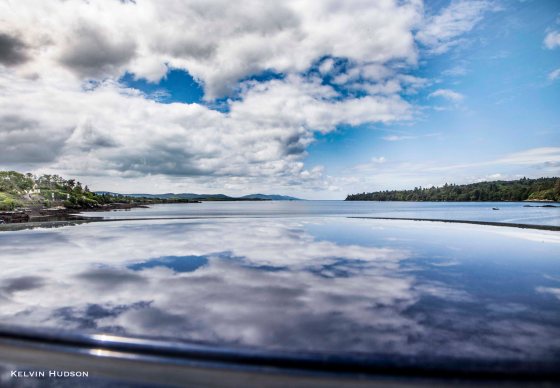 Howth is a favourite shooting location of mine. A bustling historic fishing village on the North side of Dublin. Restaurants and fish shops line the east side of the harbour with the yachting community on the west side . Its a walkers paradise with spectacular coastline views of Dublin Bay’s UNESCO biosphere and nearby small islands of Irelands eye and Lambay Island. With the help and cooperation of Shane O’Doherty who runs excellent hiking tours (www.shaneshowthhikes.com ) we managed to get a lower angle as possible of Bailey Lighthouse to give this almost iconic and popular photographic subject a more majestic feel. Along with official permission Shane and I took on board the safety aspect in order to endure the slippy grassy cliff. After our preparation day we returned the following morning at 5.30 am in freezing conditions but fortunately the wind had died down enough for excellent shooting conditions conducive with safety and dealing with shooting long exposures. I shot this during the various changes of light before sunrise and soon after; whilst observing and admiring the beauty unfolding which created different cloud formations, height and direction of the sun that revealed textures and forms in different areas of the landscape/seascape. Tides are also a consideration. Once I was happy with our efforts it was time to attempt to ‘liven’ things up with attracting the local seagulls to make an appearance but despite my supplies of seagull grub (chips oven cooked the night before) and with Shane’s ‘seagull whispering’ reputation, it just wasn’t to be. After all I was optimistic due to the Howth seagull reputation of diving down to steal peoples chips! Ah well, I hope it wasn’t because of the presence of Shane’s trusty dog, Bruno; who at least spotted our first sea otter. After breakfast I had a new brief to fulfil, along Howth harbour which is in Part 2 next week. 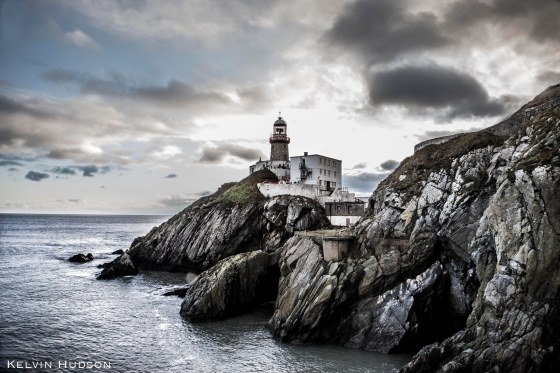 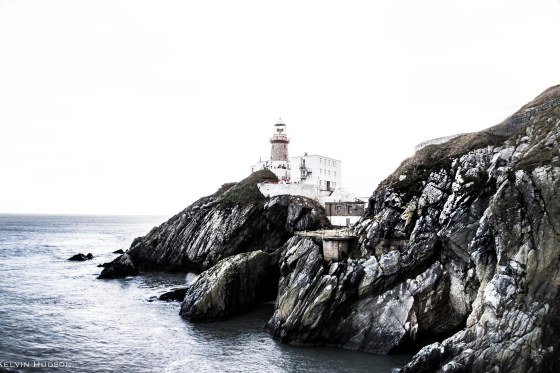 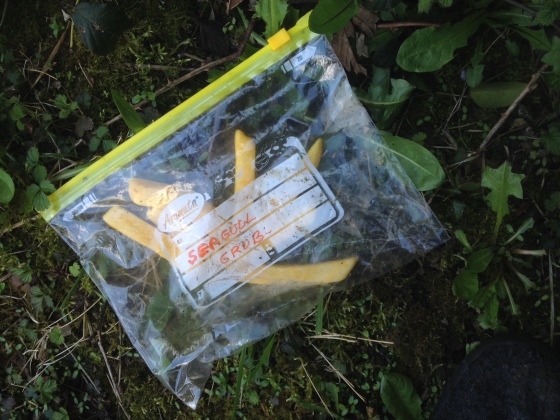 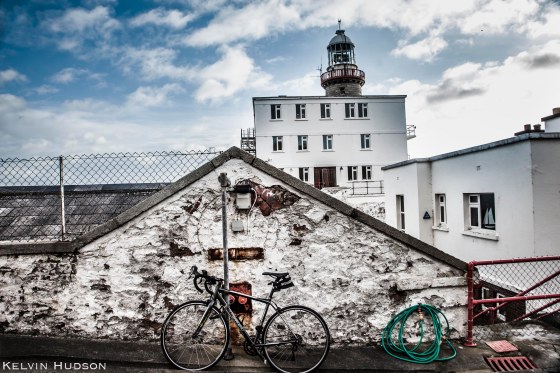 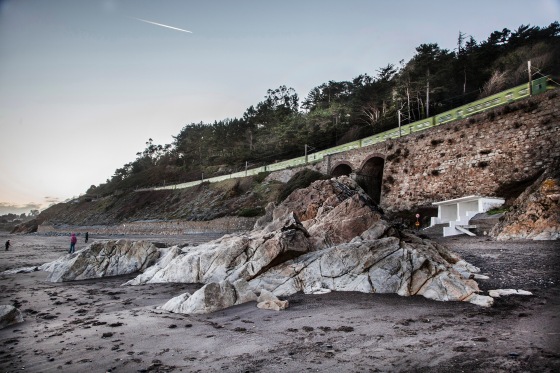 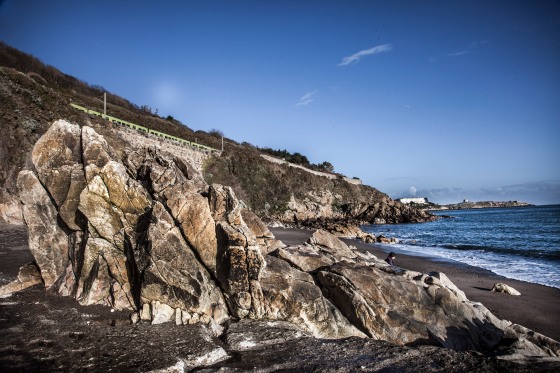 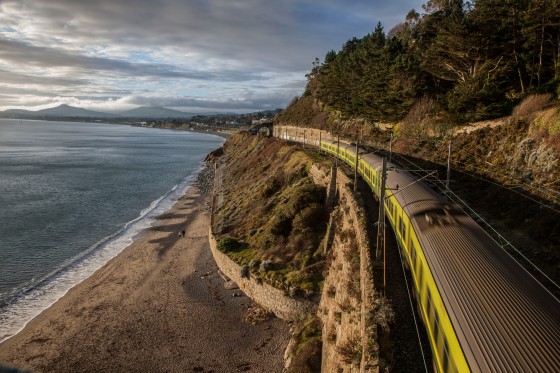 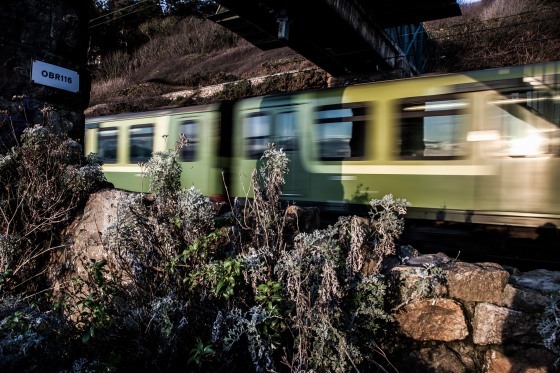 During my two day shoot at this chosen location, my main objective was to shoot the Dart train in a coastal setting within the boundaries of Dublin county. The Dublin Area Rapid Transit system, officially and popularly known as the DART, is an electrified rapid transit railway network serving the coastline and city centre of Dublin. The service makes up the core of Dublin’s suburban railway network , stretching from Greystones at its southernmost terminus to Howth and Malahide in north county Dublin. The DART serves 31 stations and consists of 53 kilometres of track, and carries in the region of 16 million passengers per year. See previous post on this location . Next week is Howth!

Whilst shooting trains overlooking Dublin Bay last December, (will post soon) I became fascinated with this cove, White Rock. Bono’s back yard (it overlooks his gaff). The sweeping strand has been compared to the Bay of Naples. It has a blue flag for its environmental status. White Rock is cut off from the main strand at high tide. It has a large white changing building for the many swimmers that frequent in all temperatures. A natural swimming platform is carved out of the large rock. Within the cliff is Decco’s Cave. They say the cave is named after an Italian who once lived in it during the 1920’s. It was an entrance to a lead mine around 1751 and later copper mining. The lead was loaded on board a barge on the spot to be exported to England. It’s now deserted.

Jose follows in his family tradition of swimming nude. This shot of him was in December!

Rionach can be seen regularly braving the elements in the Irish sea through out the year in images 4 & 5. 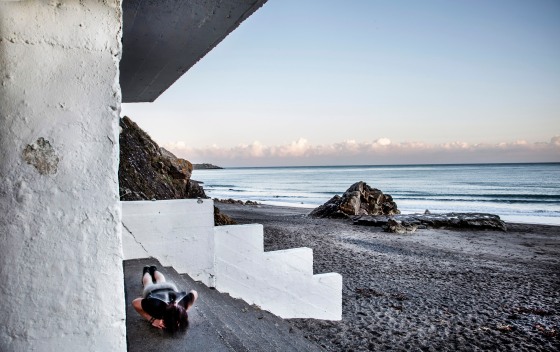 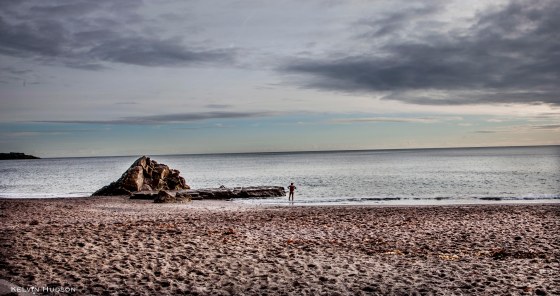